Beauty and the Beast

From firsthand experience I know that architects and designers are as excited by translucent stone materials as we are. They see a lot of emerging products and most of them, by comparison, are extremely dull. Anything that can be passed around at a design meeting that comes to life when it is held up to the light or when the light-box is switched on, makes our job rewarding and usually attracts a small crowd. Alas, in spite of their popular appeal, the wow factor isn’t always enough. Put very simply glass-laminated onyx has had something of an image problem in recent years! Whilst it arrived with a fanfare and might well be deserving of the ‘best newcomer’ accolade, translucent stone has failed to live up to the hype, at best becoming the enfant terrible of the industry, at worst, the villain of the piece. It is a reputation that’s not entirely undeserved, one that the actions of unqualified manufacturers and unscrupulous suppliers have done little to repair. Translucent stone materials have been derided for some time with many contractors and quantity surveyors understandably wary of them and others reluctant to specify them altogether. 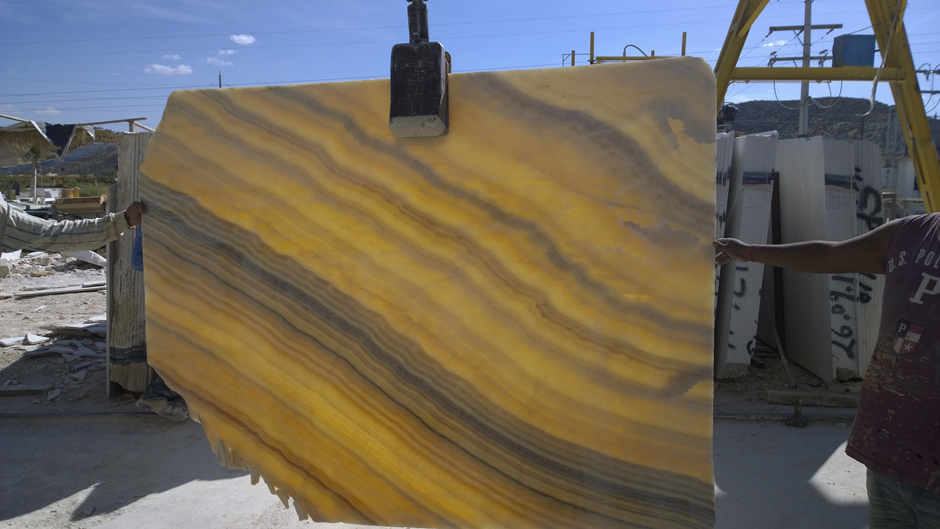 Tiger onyx slab at the quarry

Historically, translucent stone panels, (typically onyx and alabaster) have worked well in interior applications where they are not exposed to the elements but in terms of exterior use, it’s an altogether different story. The challenges presented by climate, especially in parts of the world that regularly experience extremes, are huge. It’s the reason you see many more backlit onyx bar and restaurant features than translucent stone façades and sadly it is also the reason why the world is littered with curtain walling projects that have gone awry. Thermal Stress – an issue associated with habitual expansion and contraction of the glazed unit is the main culprit – one that often leads to delamination. But in truth, there are a whole range of potential problems associated with exposure: discoloration; hydration and condensation damage; yellowing of the interlayer; air bubbles; cracking, especially around mechanical fixings; to name but a few. For this reason Artifex London has, in the past, refused to offer glass-laminated onyx materials for applications in parts of the world where the climate makes their use unsuitable. To date, the company has lost two very high profile projects because it refused to supply a product that was patently unsuitable, even though the client was prepared to ignore the evidence.

Unlike onyx, glass-laminated granite represents a very real alternative. It comes as a surprise to many that when granite is veneer-cut it becomes translucent and the effect is often strikingly beautiful. For some it may fall short in terms of its aesthetic credentials, lacking as it does the same romantic associations when viewed alongside the much-vaunted onyx alternative but in terms of performance it is a vastly superior product. And here there can be no surprise. Onyx, in addition to being fragile by nature, is also extremely porous and contains high levels of calcium. This means that it readily absorbs moisture rendering it extremely susceptible to both etching and staining. Granite has a hardness and resistance to weathering which is exceptional. It has a high load bearing capacity; exceptional crush strength and abrasive resistance; it is amenable to cutting and shaping without risk of secondary flaws; yields thin and large slabs and, above all, is prized for its unsurpassed durability. Granite has almost negligible porosity, ranging between 0.2 % and 4 % i, and is highly stable thermally showing no alteration with change in temperature. Granite is impervious to weathering from heat or airborne chemicals. 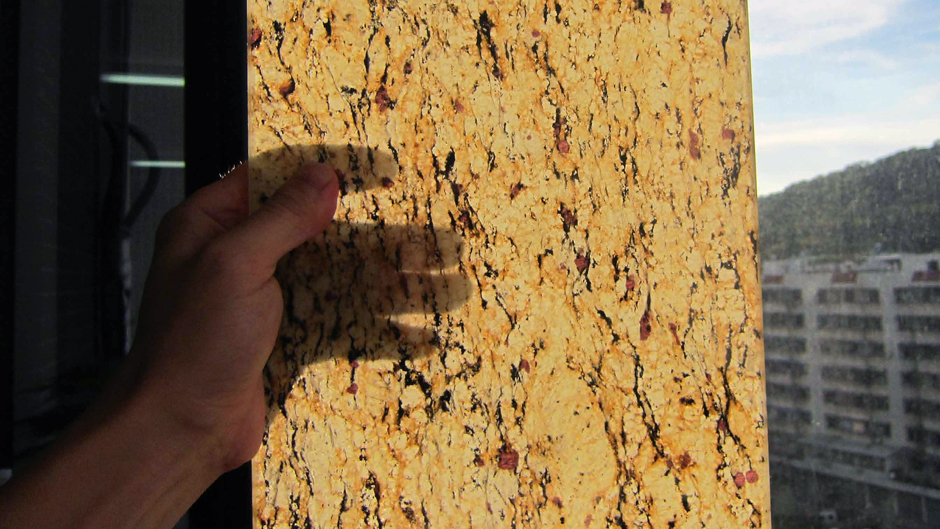 The numbers clearly stack up so why then despite the gradual increase in popularity of granite; does onyx still top every architect’s wish list? I believe that part of the answer has to do with the very characteristics that have conspired against it, its flaws; its Achilles heel – the fundamental differences between an igneous and sedimentary/metamorphic rock. No one panel of onyx is identical, and whilst technically speaking the same can be said of granite, the reality is that granite is significantly more uniform and restrained in appearance. Aesthetically it is like the stone itself, predictable. Onyx comes in infinite varieties and hues, with unpredictable variation, often containing lovely passages of movement, inclusions and veining. Its very fragility is what makes it beautiful. Onyx has an inherent magic just like an abstract painting, an exotic, mystic appeal that is undeniable.

The requirement of the industry and the challenge to my company and our manufacturing partner was to determine whether a glass-laminated onyx product could be developed which would perform to anything like the standard set by the granite alternative. Given everything I have said thus far, this was going to be no easy task. Between 2012 and 2014 the engineers worked on developing a new method of laminating glass to onyx that would overcome the limitations inherent in earlier products. By the beginning of June 2014 the company announced it had developed a new manufacturing technique and obtained a patent and by July, after an intensive program of testing, the product was launched. By combining the proprietary technology with a specially developed technical glass, Artifex London is now able to offer glass-laminated onyx and glass-laminated alabaster products which are accredited with a Grade A safety rating (UNE 14449 and 12 543 – TNO and TUV approved) and for which we can offer full product guarantees.

Glass-Laminated Onyx (GLO) in either double-glazed or triple-glazed variants is a cutting edge architectural product. Another important breakthrough is that for the first time not only can it be supplied in flat panels, but also in curved panels as well. It is 48% lighter than conventional glass but 50% more impact resistant with the benefit of significantly improved insulation figures. For further information please visit: GLO Glass Laminated Onyx

Has this breakthrough sounded the death knell for glass-laminated granite? We believe not. Onyx may have more sex appeal than its dowdier cousin but no longer is granite the preserve of headstones and kitchen worktops. I believe we have done much to elevate its standing. When rendered translucent it comes to life with an effect that is dramatic and surprising to many and in spite of the recent advancements with glass-laminated onyx, it remains a very viable alternative especially in parts of the world where hitherto, the use of translucent stone products was entirely unsupportable. It is especially suitable for projects that require very large panels sizes or are desirous of homogenous uniformity in regard to colour and texture. It is an important addition to the stable of products that we offer.

The work done recently to develop both onyx-based and granite-based technical products represents a major breakthrough for us and the industry as a whole. We are genuinely excited about the possibilities for architects and designers who can call upon them with renewed confidence and we look forward to seeing these beautiful materials employed around the world with inventiveness and artistry.